COTI: Fin Tech Company that is Building a Base Protocol 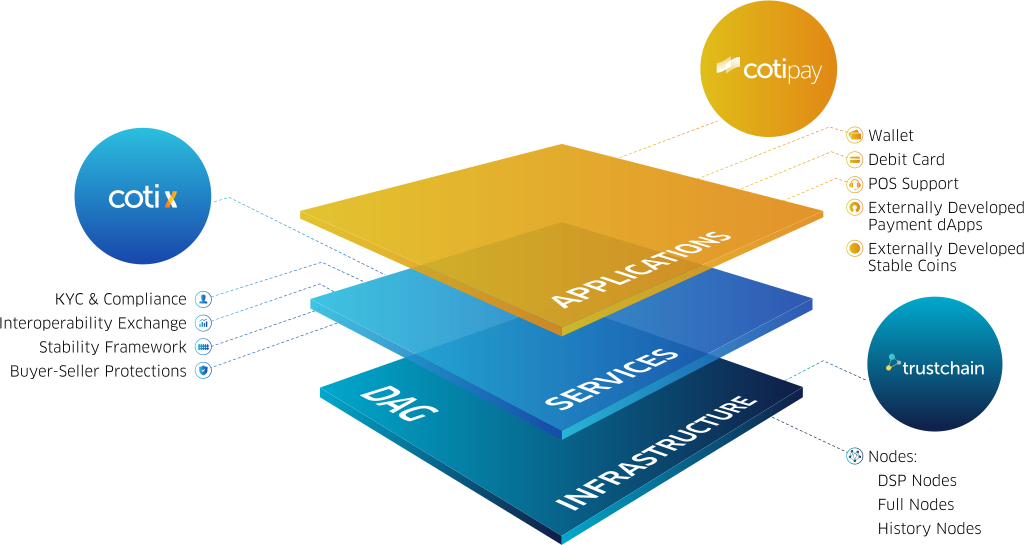 COTI, Currency Of The Internet, presents users with a scalable and user-friendly cryptocurrency by using an innovative base-layer protocol in the form of a directed acyclic graph-based ledger, built from transactions  connected through time, by harnessing trust-based algorithms. Trust should be based on a combination of the network participant‘s historical behavior data and objective information about them. COTI takes this into consideration, calculating trust using a unique machine-learning algorithm.

Trust is used in the Trustchain Algorithm to validate and confirm transactions faster.

COTI (Currency Of The Internet) is a next-generation cryptocurrency that achieves high transaction throughput and low fees, while being easy to manage and providing decentralised structures for the services users have come to expect from payment platforms, such as dispute resolution.

COTI achieves a high transaction throughput by employing a Directed Acyclic Graph (DAG) of transactions known as the Cluster, as opposed to a  blockchain. This idea is not new, and has been proven to improve performance [13, 4, 15]. Typically, DAG based cryptocurrencies 3 have been intended for large numbers of low valued transactions, possibly between  machines such as IoT devices.

Because COTI is designed to support day-to-day transactions between merchants and consumers, new algorithms have been introduced to drive the formation of the Cluster, and the approval of transactions.

Fundamental to the new approach is the Trust Score, which is assigned to each user account based on its historical behavior, and which governs the approval of that account’s transactions within the network as well as the amount of any possible fees incurred.

COTI’s unique combination of the Trustchain Algorithm and Proof of Work.

COTI introduces a high-performance cryptocurrency built atop the base layer protocol. This cryptocurrency will be used as a common means of payment, including all fees and staking inside the COTI ecosystem.

COTI is not bounded to one instance of DAG. The same infrastructure of nodes permits the creation of multiple DAGs that can be used for various purposes and originators. There can be voucher tokens, stable coins, dedicated tokens for global companies, or scalability tokens to speed up settlements in other blockchains. See more details in "MultiDAG" section below.

This article does not constitute investment advice.

Proof of Authority (PoA) Summary [Cryptocurrency consensus mechanisms]
Proof of Authority is a consensus mechanism where members of a cryptocurrency network are identified and receive delegated powers to solve blocks. If they defraud the system their identity is at stake and they will either be prosecuted or booted from the network. This is a centralized system where a higher authority delegates mining powers […] Opinion: Will Tether blow up? [Dec 2017]
There is an elephant in the room in the cryptocurrency world and it’s called Tether. The concept of a cryptocurrency that is tied to the world’s reference fiat currency is very interesting indeed. But it has a very expensive requirement: for every unit of this cryptocurrency, there must be an equal unit in the reference […] Opinion: Decentralized blockchains can only survive having a valuable token, like Bitcoin, attached to them [Feb 2018]
We’ve heard this time and again, especially from folks in the financial sector: “blockchain is here to stay, Bitcoin not so much”. Is this really so? We disagree, and in this article we discuss the origins of Bitcoin and how the problem it solved only makes sense when there’s a reward for participants to join […] Proof of Location (PoL) Summary [Cryptocurrency consensus mechanisms]
In a Proof of Location consensus algorithm, users’ geospatial coordinates are accounted for as proof of value. This kind of algorithm is usually employed in cryptocurrency geomining systems. In a geomining application, users earn rewards for being at a certain place at a certain time. If, for example, a company wished to gather participants for […]