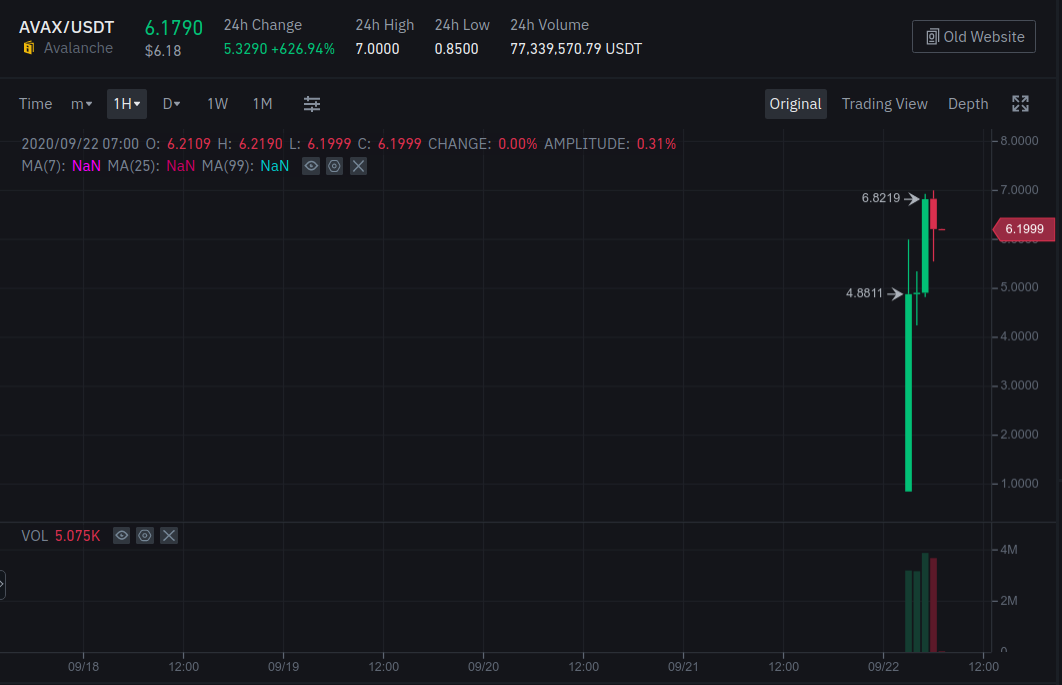 As we write this article, AVAX has gained over 620% (8 AM UTC) in the first 4 hours of trading at Binance. Volume stood at impressive U$ 72 million in just hours (> $100 million when we last updated this text 1 hour later).

Despite some profit-taking during the past 2 hours, AVAX continues trading above 580% gains at noon UTC.

Avalanche Telegram groups are on fire as even the most expensive option () in the AVAX private sale* gained 6x in the fist few hours.

It was the first official listing from a major exchange, honoring Ava Labs' promise to get listed with a top tier exchange at mainnet launch. Live Binance AVAX/USDT trading pair shows impressive activity.

AVAX deposits are now open at Bitfinex but trading will begin at noon UTC on September 23, approximately 24 hours after Binance.

OKEx has just announced they will be listing the AVAX coin as well.

OKEx AVAX deposits were opened at 8 AM UTC on September 22, same day as Binance.

AVAX got listed on CoinEx at 6 AM, Sept 22, same day as Binance. Deposits were opened first, then trading began at noon the same day.

AVAX is currently listed on the following exchanges:

One node had over 628k AVAX delegated to it just a few hours after mainnet launch with 63k AVAX potential rewards - a U$ 3.6 million value at current prices.

Most AVAX is still locked for vesting periods ranging from 1 year onwards.

Some private sale AVAX has been pledged to be locked by founders and early holders for up to 10 years, while public sale options A and B, as well as bounty hunters and community rewards, will be locked for at least 1 year.

This means AVAX price discovery won't be complete until at least 3rd quarter 2021.

The AVAX sale happened on July 15th and ended just 4.5 hours after being open at 10 AM Eastern Time.

Meanwhile, Public Sale Option A2 had a separate pool of 60M tokens which was made larger on purpose in order to satisfy all early investors.

The maximum AVAX sold to the public in 2020 was 72M tokens, which represents 20% of the mainnet coins.

Here are the specific details of each public sale option as executed in July 2020:

Therefore, the coins you see being traded at U$ 6.xx at the time of this writing come from the Public Option B, which means these traders made a ~7x gain in the first few hours of AVAX trading!

The AVAX mainnet launch has been a thunderous success so far and early investors seem to be very satisfied. The markets will be watching AVAX price closely, especially since Nasdaq and Bitcoin have suffered considerable losses during the past week.

Despite it being a very difficult time around the world with the COVID-19 pandemic, as well as recent tech market downturn, Ava Labs was able to adapt.

The Avalanche team completed the public sale and launched mainnet with enormous success still in 2020.

Some had speculated that Avalanche could go the Cardano route, facing years of delays due to technical issues - something which, fortunately, didn't happen.

The Cornell-led team of developers got the product out the door with a very small delay, since AVAX mainnet had been promised by the end of August.

Avalanche AVAX : An obvious 20x is upon us [Avalanche Price Opinion]
Price prediction is the riskiest business out there – and this article may well be the riskiest thing I’ve ever written. But this seems like such an obvious one to me, I’m a bit surprised others haven’t put this out there before. Perhaps everyone’s just quietly filling the bags with Avalanche before it explodes? Time […] avax-python Network Message Pipeline
Here’s a short overview of the avax-python Avalanche message pipeline. We’ve followed the reference Go implementation as closely as possible, but the Python code is still in very early development, so it’s lacking a lot of details. For example, right now the Python message pipeline is synchronous, whereas the Go implementation uses asynchronous channels and […] avax-python – Python utils for AVAX cryptocurrency and Avalanche network exploration
avax-python is a Python library and set of utils for the exploration of the Avalanche AVAX cryptocurrency and its network. The crypto.bi avax-python project began as a thin wrapper around AvalancheGo node API, but it now supports several other functionalities such as wallet address and secret phrase generation, network traffic capture, customizable protocol handlers and a lot […] avax-python Implementation Notes
Here you’ll find a few implementation notes about avax-python. This is mainly targeted at developers who wish to work on the Python source code. Python <- Go Golang object orientation is different from the Python OO approach. As a result, we had to make the choice of making the code more pythonic by using idioms […]