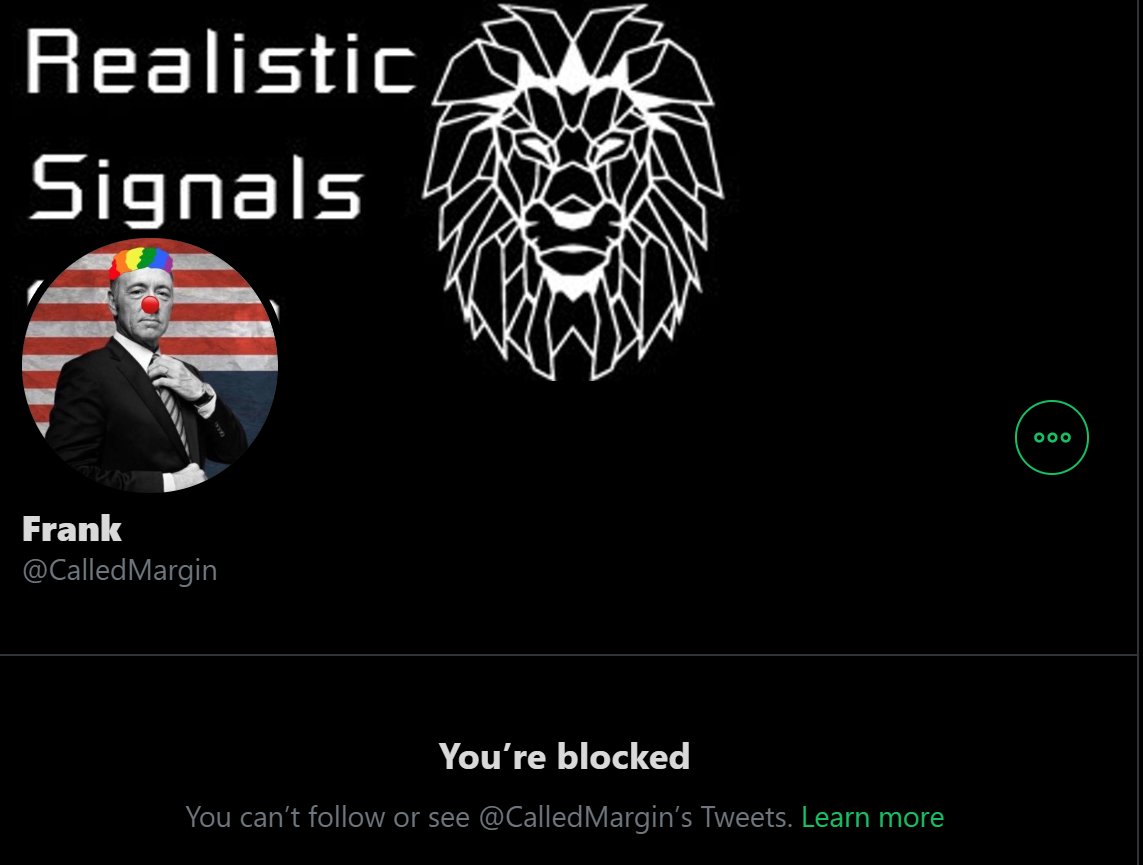 On July 2, 2020, a user by the pseudonym J.P. (abbreviated to preserve his identity) posted a short message to Realistic Signals Telegram group:

According to JP, a certain Crypto Frank had disappeared and, apparently, tens of investors' money disappeared with him.

In this post we try to unravel and document the Realistic Signals Group scandal.

We're not calling it the Realistic Signals Group scam yet as we haven't heard from Crypto Frank or RSG. So, if they or any of their representatives are reading this, please know we're open to publish your version of these events as well.

Note that this isn't at all related to cryptocurrencies - it all seems to have been done using traditional methods.

So, let's get started.

Short answer is: we don't know for sure. The clues found until now point to an Italian citizen with a penchant for black and white photos.

Important Note: There are countless avatars using the name CryptoFrank. Our investigation into this case did not find any link between most CryptoFrank's and the present case. Please do not harass, pursue, stalk or accuse anyone simply because their avatar may be called CryptoFrank. Let the authorities do their work, please. All identities will be revealed at the appropriate time.

Aaand, now for the long version:

(Note the Sept 2019 timestamp on the BMH tweets. We'll come back to this later.)

Throughout this post, we'll call it the Crypto Frank persona. First, because we don't know who he is. Second because it could be a group of people for all we know.

After all, on the Internet nobody knows you're a dog.

Interestingly, CryptoFrank used to warn others against scammers on Twitter.

TelegramCryptoGroups.com had the following public description, supposedly published by Frank on March 6, 2019:

Welcome to the Realistic Signals Group TROLL BOX This channel is free and open to everyone, it’s supposed to be a chat for every human that believes, invests or trades in the crypto world. Some rules you have to follow: - Respect everyone’s opinion. - No disrespectful behaviour will be tolerated and will result in an immediate ban. - Limit your posts to crypto things only, but some funny stuff is very welcome sometimes. - Share charts, thoughts, ideas with no limitation. - if a VIP Member shares a single call given in the VIP Group he/she will be permanently banned from both Groups. I will participate in the chat when I have time but my main mission is and will always be to provide highly profitable calls for the VIP Realistic Signals Group. If you want to join the RSG feel free to contact me in private or on twitter @CalledMargin (former @CUnderwoo2). Wish you all happy profits! ✅✅✅ Frank

(Note the CalledMargin mention as we'll discuss that later.)

According to TelegramCryptoGroups.com, the group had no more than 382 members.

The group was advertised by the @CUnderwoo2 persona on Twitter. Here's a deleted tweet that was archived by CryptoIQ :

So the Telegram group was pitched as a free chat for VIP members. (To be honest this was quite a weak value proposition.).

At some point RSG even had t-shirts and other merchandise custom-made.

According to recent chat archives, Crypto Frank may have been selling these t-shirts until very recently (July 2020). It's not clear whether the merchandise was actually delivered.

Despite the flashy graphics and merchandise, the group didn't really find traction. TelegramCryptoGroups shows a constant decline in member count throughout.

The public Telegram group was just a chat room, a troll box as some crypto comunities call it. (In fact, the group was called RSGTrollboxx.). Some chat archives, the group was mostly banter, chart analysis and parking lot chat.

The real business was carried in a closed group called the VIP Realistic Signals Group.

The RSG fund, which is where the VIP's actually sent their Bitcoin to be invested by Crypto Frank.

It's unclear what the RSG fund's performance was. Some claim it made 400% before the admins disappeared. This can't be independently confirmed since it was a closed fund for "VIP's" and there isn't much public information available about it. It is unclear whether anyone was able to withdraw any previously reported profits.

What we do know is that Crypto Frank announced a very bad trade near March 28, 2020.

After this trade, Crypto Frank's profiles began to vanish. Twitter, Telegram, one after another slowly faded from public view. Just like that, everything tying Frank to this trade was gone.

While there's no proof that this catastrophic, possibly highly leveraged, trade is the reason for Crypto Frank's disappearance, the sequence of events does seem to suggest a strong correlation.

So, we know how Realistic Signals Group came to be, how it was promoted and what may have caused the fund's demise, but what was the source of the controversy, specifically?

Looks like the Crypto Frank persona took deposits from group members and may have walked away with approximately U$ 500k in funds.

The VIP's seemed to deposit a great deal of trust in Crypto Frank. Reading the Telegram group's discussions, you get the sense that this community truly liked Crypto Frank and trusted him. Whereas most crypto traders are skeptical of any such investment fund, his sudden disappearance seems to have been a shocking turn of events for all in the VIP group.

The Cunderwoo2 => MarginCalled transition happened some time after 9/2019, though, as this account was suspended.

Since then, and until approximately July 24 2020, the Crypto Frank persona used the MarginCalled avatar, although that also was short lived. At the time of this writing, the @MarginCalled avatar is gone as well.

Several other accounts began to appear after MarginCalled went away.

Recall that the MarginCalled account had a direct relation to the Realistic Signals Group. This account contained ample material which linked the Crypto Frank persona to the trades carried out by the fund.

It makes sense that Crypto Frank would need to remove this account from public view if some of that material somehow linked him to RSG. Since then, several other accounts have popped up under different names:

Has anyone seen the scammer @calledmargin aka @fingex_ aka CryptoFrank? The group of people he took millions from is still grateful for information that leads to jail for him.#RSG #fraud #Realistic #signals #group

A quick search for the Crypto Frank persona's Instagram handle f________o yields several accounts that somehow reference the same person. Interesting, though, how they're not at all trying to hide their Instagram account!

The f________o handle is, by all means, very unique and will trace whatever account right back to this person!

Interestingly, it seems like this person is not trying to hide at all, or they wouldn't reuse this exotic Instagram handle. Could they be simply trying to unlink their identity from Realistic Signals Group?

Cyber sleuth @DrHOSP1, who has been tracing Crypto Frank's steps for 6+ months now, outright calls him a scammer, among other things:

This is one of the Twitter accounts of the scammer @calledmargin, who stole millions from investors.

As you can see he got rekt badly in 2018 by longing Ripple and other shit.

Feel free to mine the profile for more information. https://t.co/htl16QmIdj

Follow that and this next short thread for some more information:

This is @calledmargin. The Italian scammer who's still on the run with millions of investors' money.

The group is still looking for help and willing to offer a reward for retrieving the stolen funds.

If you got any hints report them here https://t.co/ovwT2X4jLs pic.twitter.com/2HucaGLgq7

As you can see all these events are fairly recent, so you'll certainly hear more about this case in the coming weeks and months. (Especially as the victims pursue the case with European authorities.)

Recent chat logs mention that the Interpol is on the case. Obviously no specifics are provided, but we may see new developments soon.

Or maybe has all of this been a bad misunderstanding? Will Crypto Frank show up and explain he had COVID-19 and will reimburse investors? Anything's possible.

Or maybe he simply took the advice and GTFO.

no you should just GTFO .. I know you just want more followers by this convo.. good luck with that... cheers pic.twitter.com/OWV1B6fU2o

With this, we add one more case to our list of 2020 Bitcoin hacks and scams.