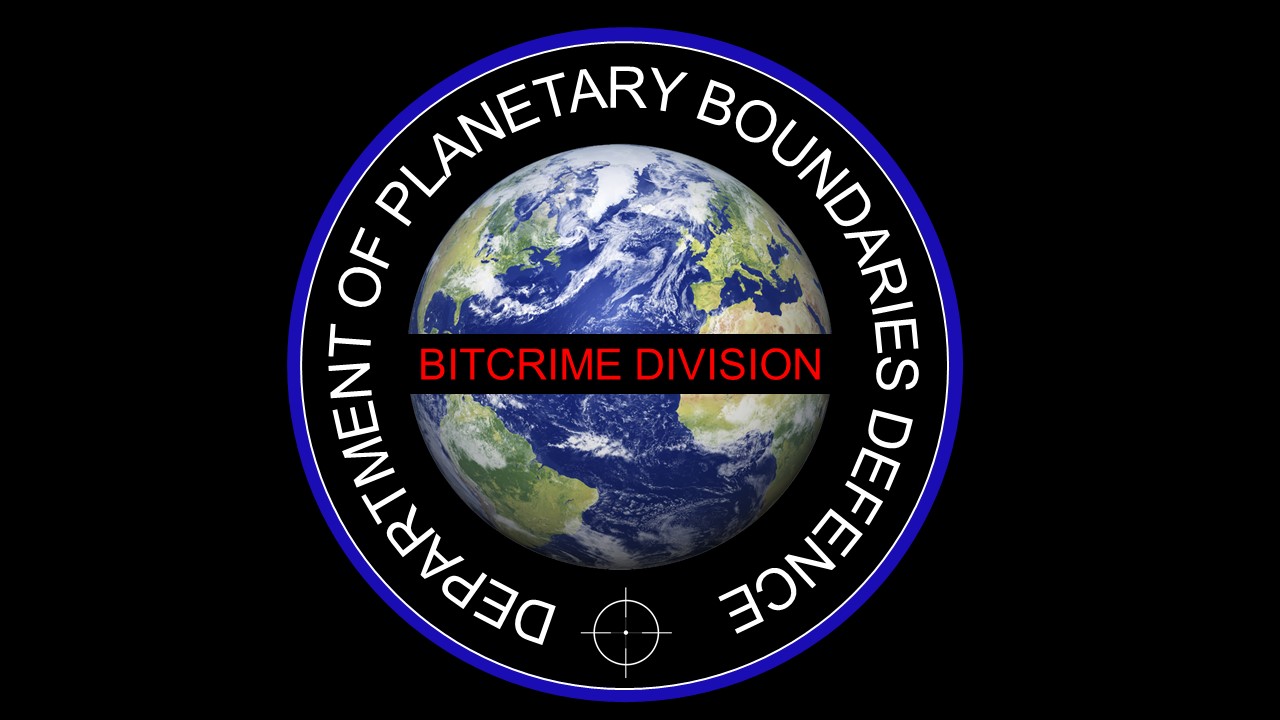 Lane is the sustainability analyst who in 2013 discovered the mechanism that links the carbon footprint of mining bitcoin to the price of the cryptocurrency.

According to Lane, cryptocurrency mining is on a collision course with regulators because it threatens to overwhelm the world’s capacity to manage climate change.

“Every year that passes without governments taking action to cut carbon emissions makes a subsequent over-reaction against crypto even more likely,” Lane said.

This is the scenario presented in LOVE IN THE AGE OF BITCOIN.

In the story the Department of Planetary Boundaries Defence prosecutes the illegal use of electricity in an attempt to rein-in global carbon emissions to avert abrupt climate change.

Absinthe Rhinohorn works for BITCRIME DIVISION and his job is to shoot cryptocurrency miners on sight and destroy their mining infrastructure.

Lane says he doesn’t believe that cryptocurrency miners ought to be killed but something needs to be done to bring down the cryptocurrency sector’s ballooning carbon footprint.

“Absinthe Rhinohorn won’t be kicking your door in anytime soon, but one day there will be a heavy price to pay for crypto-carbon pollution,” Lane said.

SYNOPSIS - LOVE IN THE AGE OF BITCOIN

The world is wracked by climate change, and desperate governments have established the Department of Planetary Boundaries Defence (DPBD) and issued shoot-on-sight orders for illicit energy use, including cryptocurrency mining. Absinthe Rhinohorn works at the pointy end of ‘Bitcrime Division’ and his job is to terminate cryptocurrency miners - ‘ventilate the crypto-rats’ - with extreme prejudice.

Absinthe wakes one morning, his heart racing furiously, anxious that his sweetheart - undercover agent Turtledove - has been harmed. Turtledove tracks wildlife smugglers and is constantly at risk from Asian crime gangs. Absinthe fronts the Director of Bitcrime Division to answer for a $12 million transformer that he accidentally blew up in a recent botched mission. In the meeting, he learns that three people from Turtledove’s unit were killed in an overseas incident. Concerned, Absinthe approaches Turtledove’s boss seeking proof-alive but she refuses to share classified information. The following day, Absinthe is sent on a mission to track down the crypto-rats who have been illegally mining cryptocurrency on a supercomputer in a nuclear power facility.

On his return, he learns that Agent Turtledove is safe, and she visits him that night. She tells him that she can’t see him anymore because of his drinking and his inappropriate post-wine communications that have professionally compromised her. Sad, and with his heart still racing, Absinthe visits his cardiologist, Dr Stent, and learns that cryptocurrency miners have hacked his pacemaker and are using it to mine a cryptocurrency called Love Coin. Turtledove returns to Hong Kong and is hospitalised following an attack by Chong Triad. Seeking revenge, Absinthe convinces the Chairman of the DPBD to allow him to visit Hong Kong to kill the Chong Triad including the three leaders.

The mission is a success and the Chairman invites Absinthe to a corporate cocktail function. Turtledove, recovered now, accompanies him to keep him out of trouble. Absinthe foolishly thinks that she wants to get back with him and when he is rebuffed, he takes it badly. Bitcrime Division tracks down the Love Coin miners and goes on the attack. Distracted, Absinthe is shot three times in his bullet proof vest, over his heart. He realizes that he is falling apart over the failed affair with Turtledove.

With the Love Coin miners killed, Absinthe feels his heart return to normal. Turtledove visits him to tell him that his Hong Kong mission had helped her advance a plan to take the fight to the powerful people in the wildlife trafficking game. She thanks him and says that she is going deep underground and will probably never see him again.

She tells him not to be sad, and to find something to distract him from thinking about her. Absinthe drowns his sorrows and next morning wakes to find a red-head called Marmalade in his bed. He recognizes her a working at the Cardiologist office. He asks her how she got into his apartment, and she tells him that she has been coming home with him the previous three nights.

Goodreads : Love in the Age of Bitcoin