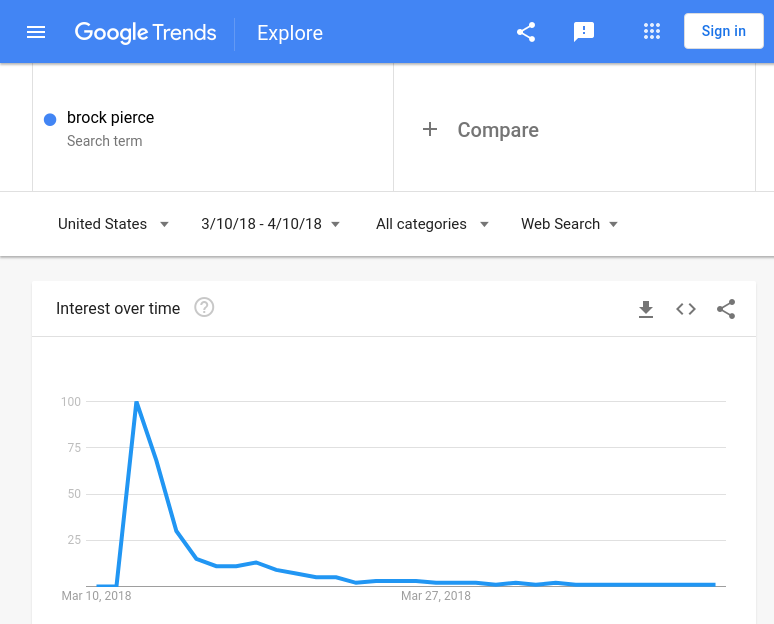 The so called Brock Pierce scandal became a WWW sensation after it was mentioned by comedian John Oliver in an episode of Last Week Tonight.

Following the scandal, Pierce had to step down as Chief Strategy Officer at Block.one, the company behind the EOS cryptocurrency.

Oliver did a full 25 minute segment on cryptocurrencies which, for several days, generated a lot of buzz in social networks.

During the second half of the episode, Oliver highlighted several high profile cryptocurrency-related scandals, starting with Bitconnect and the infamous Carlos Matos performance.

The episode featured a paparazzi interview with Michael Keaton, where the 2014 Best Actor Academy nominee stopped to discuss Bitcoin with the photographers outside a restaurant.

At approximately 18m53s into the segment, Oliver starts discussing the case of cryptocurrency development company Block.one and the EOS project.

The comedian then mentions how Block.one raised U$ 1.5 billion when Facebook took 7 years to raise the same amount of capital.

The from 20m20s on, Oliver starts to profile Brock Pierce, calling him a "sleepy, creepy cowboy from the future" (presumably because Pierce is wearing a cowboy hat).

At 20m36s comedian then invited his viewers to search for Brock Pierce scandal as an example of the type of cryptocurrency controversy he had been discussing for the better part of the clip.

Who is Brock Pierce?

Brock Pierce was a child actor who later went into the video-game business, specifically into the virtual assets niche - items that could be bought and sold inside videogames.

The in-game nature of his first post-acting career business naturally led him to cryptocurrencies.

By October 2017, he had raised over U$ 88 million in venture capital for cryptocurrency projects.

His biggest project, the EOS ICO, raised over U$ 700 million, making it the most successful initial coin offering of 2017 (an overall spectacular year for ICO's and cryptocurrency valuation).

At the time of this writing, EOS ranked #8 among the most valuable cryptocurrencies on CoinMarketCap.com, with a market capitalization of U$ 3.9 billion dollars - 557% above the amount raised on the 2017 ICO.

In 2014, Pierce was elected to manage the Bitcoin Foundation, a tenure marred by mismanagement allegations.

Pierce is an advisor at Tether.

He is one of the co-founders of the Tether project, having joined at its inception phase. At this time, Mr. Pierce worked at Mastercoin, which later became Omni.

Historical Note
For many years Tether was known as Realcoin and run only on top of the Omni system (a 2nd layer that ran on top of Bitcoin). Today, Tether uses Ethereum, Tron and Omni.

It is estimated that Brock Pierce owned between U$ 700 million and 1 billion dollars worth of cryptocurrency in early 2018.

In July 2020, Brock Pierce announced he was running for President of the United States.

Pierce's platform was based on technology as a tool for reform.

Technology is enabling a new age for humanity - an age for truth, and age for enlightenment. New communication channels, coupled with a critical point in our nation’s history, make for a time in which voices that have been silenced for generations can have impact. #BROCKTHEVOTE

Shortly after the announcement, Google Trends displayed renewed interest in the candidate, showing a spike of searches for Brock Pierce early in July 2020:

Feature story from The Hollywood Reporter

Buzzfeed: The man at the heart of Hollywood Sex Abuse Scandal