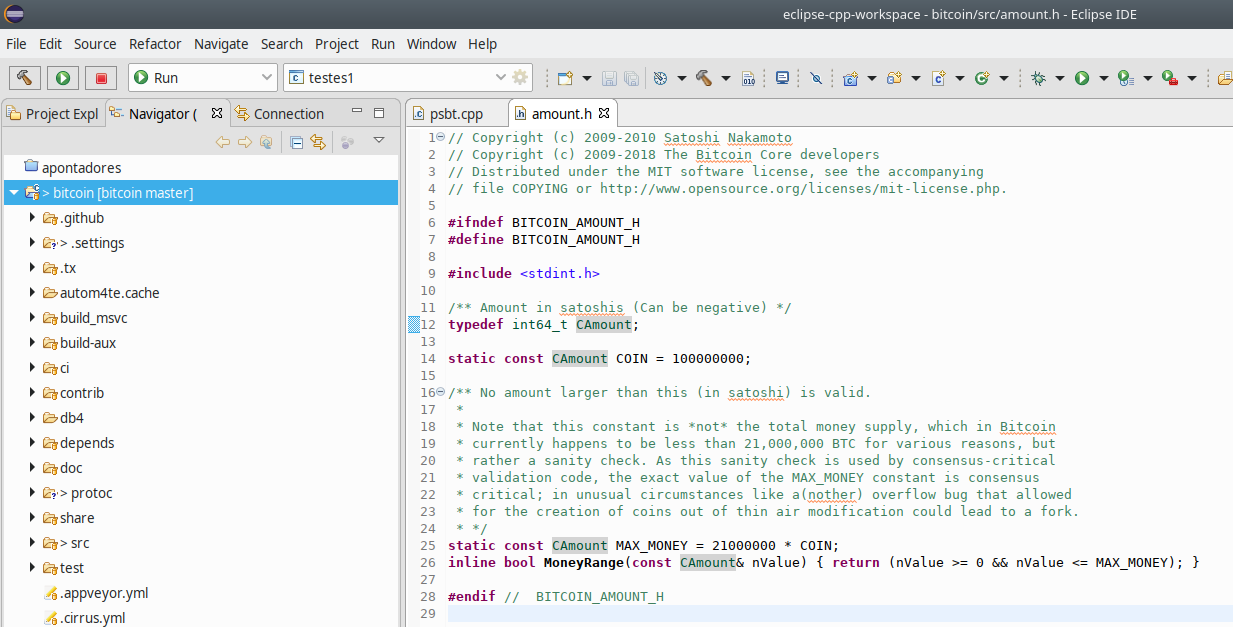 amount.h is one of simplest source files in Bitcoin Core.

In fact we can paste it in it entirety and discuss it afterwards:

To explain this typedef, perhaps we should discuss how a Bitcoin is stored in order to understand why a 64 bit integer is enough to represent any Bitcoin amount.

One Bitcoin can be subdivided into 8 decimal places and the largest possible amount of BTC is 21 million (21 with 6 zeroes).

So in total, a Bitcoin amount can take up 16 decimal places: 8 to the left of the dot, 8 to the right.

In Bitcoin Core all amounts are in Satoshis. There is no decimal dot. The system knows that anything under the 8th decimal place is a fraction and everything over that is a whole BTC - there is no dot in the representation, which is why an int64_t can store any Bitcoin amount as an integer.

As you work with Bitcoin you get used to visualizing the 8 positions before and after the dot.

Magnitude of powers of 2 can be relatively approximated to powers of 10 by dividing the logarithm by 3.

So a 64 bit integer can store up to roughtly 21 decimal places.

CAmount is just a typedef'ed int64_t. You'll see this type all throughout the source code.

As we just discussed this is a digit 1 just one place to the left of 8 zeroes. Remember 8 zeroes are the fractional places (bbbbbbbbssssssss).

Therefore this defines 1 BTC. It's used throughout the source code to represent one whole Bitcoin.

This is simply a ceiling amount that can be used to test for valid amounts.

Anything over MAX_MONEY is invalid.

You may think this is unnecessary, but an early Bitcoin hack in fact exploited a bug to generate amounts much larger than MAX_MONEY.

As you can see int64_t is a signed integer. If you enter a negative number, the leftmost bit will be set in a int64_t.

If an integer with the highest bit set is interpreted as an unsigned number (as all Bitcoin are unsigned), you get an astronomic number. This exploit was used to generate billions of BTC in 2010.

If this were to happen today somehow, this number would be compared to MAX_MONEY and it'd be immediately rejected.

Bitcoin Blockchain MySQL Database Inserter Configuration
Toolbox tries to read configuration from $HOME/.cyptobi/cryptobi.conf If a config file is unavailable, then defaults will be applied. The order of precendence from highest to lowest is: Command line options override all others. Config file options override defaults. Program defaults. Environment Set CRYPTOBI_HOME environment variable to the directory where you cloned the Crypto.BI Toolbox from […] Bitcoin Blockchain SQL Schema for MySQL
This SQL schema was created for Crypto.BI Toolbox. The same, or similar, SQL schema can be used by anyone exploring Bitcoin with the help of a MySQL RDBMS. Although we didn’t test this SQL with other RDBMS’, it should be fully compatible with MariaDB and any other MySQL-derived system. How the data is inserted/retrieved to/from […] C++ Bitcoin Blockchain to MySQL Database Interface
Crypto.BI Toolbox abstracts database access through a thin database access layer. Every database operation required to run the system has been made into a separate function in db/dao/CBDAODriver.h This traditional approach, used in many system architectures, allows us to switch storage solutions by creating new subclasses of CBDAODriver. For instance, if a graph database was […] Building Bitcoin Toolbox MySQL Blockchain Inserter from source
Here you’ll find instructions on how to build Bitcoin Toolbox from source code. Build Requirements Bitcoin Core >= 0.18.99 Boost Libraries >= 1.71.0 CMake >= 3.5 g++ >= 9.2 Boost Libraries Build or download a binary distribution of Boost Libraries. Take note of the root Boost directory (where boost/ is found). We’ll call this directory […]