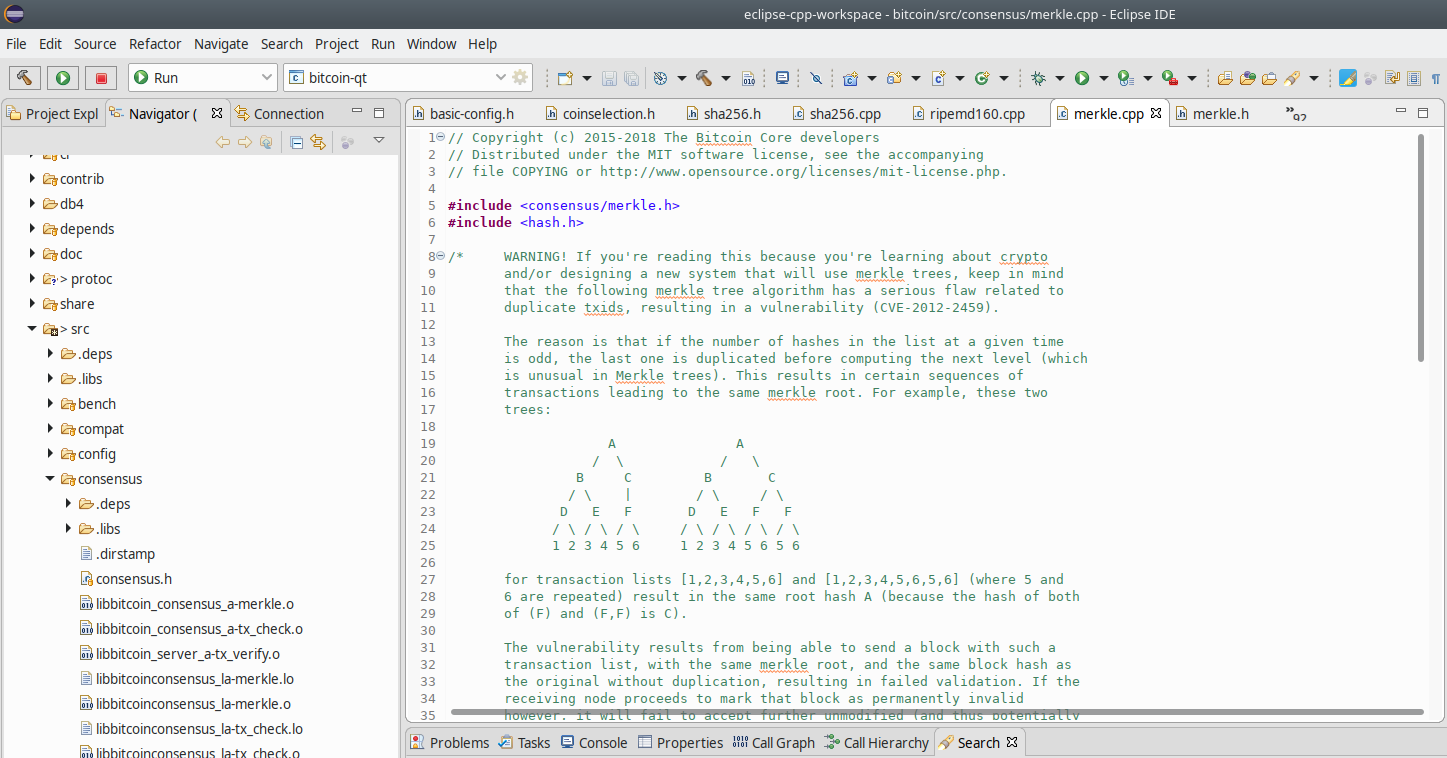 In this article we take a look at one of the most important components of block validation and overall blockchain integrity: the Merkle Root derivation process.

While it's one of the most critical components in all of Bitcoin Core, its concept and implementation are very simple and straightforward.

At the top of merkle.cpp we find an interesting comment that's worth the read. I've taken a screenshot to preserve the formatting and the original tree drawings.

First function we encounter is the Merkle Root computation subroutine.

It takes a hashes vector containing the input hashes and returns a uint256 digest for the merkle root. The purpose of the mutated argument is explained in the vulnerability screenshot posted above: if this tree is ambiguous and can generate a collision then set *mutated to true to let the caller know.

Now we have a utility function that allows us to pass in a block to compute its Merkle root.

It declares a leaves std::vector, resizes leaves to the size of the block's number of transactions and copies each TX into leaves. Then it calls ComputeMerkleRoot to compute the Merkle root on the just assembled vector.

Next up, another utility function to compute the Merkle root of the transaction witness hashes.

It works exactly the same way as BlockMerkleRoot except it calls GetWitnessHash instead of GetHash on each transaction.

What is the Merkle root?

Merkle root of a bitcoin block calculated in C#

Bitcoin Blockchain SQL Schema for MySQL
This SQL schema was created for Crypto.BI Toolbox. The same, or similar, SQL schema can be used by anyone exploring Bitcoin with the help of a MySQL RDBMS. Although we didn’t test this SQL with other RDBMS’, it should be fully compatible with MariaDB and any other MySQL-derived system. How the data is inserted/retrieved to/from […] C++ Bitcoin Blockchain to MySQL Database Interface
Crypto.BI Toolbox abstracts database access through a thin database access layer. Every database operation required to run the system has been made into a separate function in db/dao/CBDAODriver.h This traditional approach, used in many system architectures, allows us to switch storage solutions by creating new subclasses of CBDAODriver. For instance, if a graph database was […] Building the Haskell cardano-node on Linux
tl;dr; Jump straight to the build instructions The Details Looking forward to the Haskell mainnet, the next step in the Cardano project, I’ve begun exploring the cardano-node Haskell implementation. I find that exploring source code is much easier if you actually watch the program run for a while. So, the first thing a developer has […] optional.h a pre-C++17 optional type in the Bitcoin source code
optional.h is a stub that’ll likely get removed from Bitcoin Core at a future date when C++ 17 gets formally adopted for the entire project. By reading the Bitcoin Core sources you can see that lots of sections could use C++ 17 idioms. Let’s keep in mind though that Bitcoin Core is high security software […]